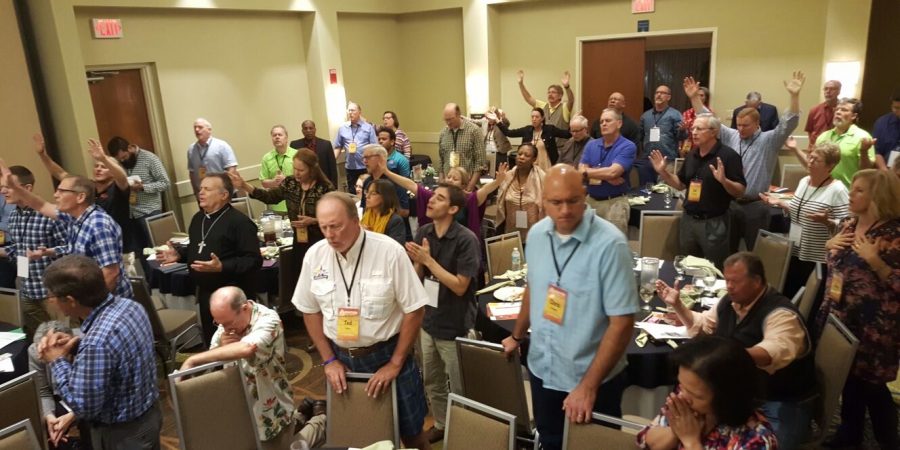 Eighty-one leaders, prayer coordinators, and intercessors from 38 different organizations gathered in Orlando last month for GACX’s inaugural Ignition Prayer Summit.  “Jesus told us, ‘Without me, you can do nothing,'” said GACX Chairman Bekele Shanko. “A dream of planting a church for every 1,000 people can’t be fulfilled without God’s intervention.”

The prayer summit was a time of learning, praying together, encouraging, and developing purposeful prayer partnerships. A highlight was Dick Eastman from Every Home for Christ (a GACX partner), who presented a shortened version of his well-known “Change the World School of Prayer.”

The President of Korea was not used to this kind of response. He became very firm, raised his voice and said, “This is the President of Korea and I have a very urgent matter and I must speak to Pastor Cho!” She responded with equal firmness by saying, “I’m sorry, but Pastor Cho is meeting with the King of the universe — and he must not be disturbed!”

“The Holy Spirit pierced our hearts with this story to reveal the absolute foundational truth that abiding time with Jesus is our first priority,” said Colin Millar, who alongside Steve Harrison leads GACX’s prayer focus. Steve had this reflection on the summit:

Years ago, when involved in Christian education, I remember attending numerous teacher training conferences, getting inspired and challenged, and yet a few days later I had not implemented anything of what I had learned and been challenged by! I remember asking my teaching mentor how to avoid this post-summit flop, and he advised me to ask the Lord what is the most important thing He wanted me to implement — and do that one thing quickly! During the Ignition Summit, God seriously challenged my heart in regard to making prayer first, ministry second a reality in my life. The practical implication of that is that I covenanted with the Lord to tithe my day in prayer. By God’s grace I have been able to do that this week!

The summit concluded as participants spent time “prayer-storming” — brainstorming and praying — on actionable strategies for connecting mission-focused prayer partnerships and movements. “It was amazing to see the unity of hearts, a commitment to prioritize God’s kingdom above organizations, a willingness to share resources, and steps develop for globally interconnected prayer movements,” adds Bekele.

GACX is primarily focused on prayer as the engine which moves God’s mission forward in the context of church multiplication based on four Scripture-centered focuses.

From this foundation, GACX is pursuing three goals related to its core mission. First, GACX is encouraging every

member to pursue both individual and corporate prayer partnerships with other members. Coming together before the throne of God and lifting each other’s needs is a solid foundation for effective partnerships.

Second, GACX desires to develop prayer networks in different global regions. This means encouraging prayer partnerships between regional representatives of GACX global members, as well as those connected to regional or national GACX affiliates. At a higher level, GACX would like to mobilize the global Church to pray for multiplication in these regions.

Finally, GACX desires to see local-level prayer “canopies” which will provide 24/7 intercession for 100 healthy, multiplying churches in 100,000-person population segments. In practice, this might mean a dozen canopies to cover a major city or a single canopy covering many small villages.