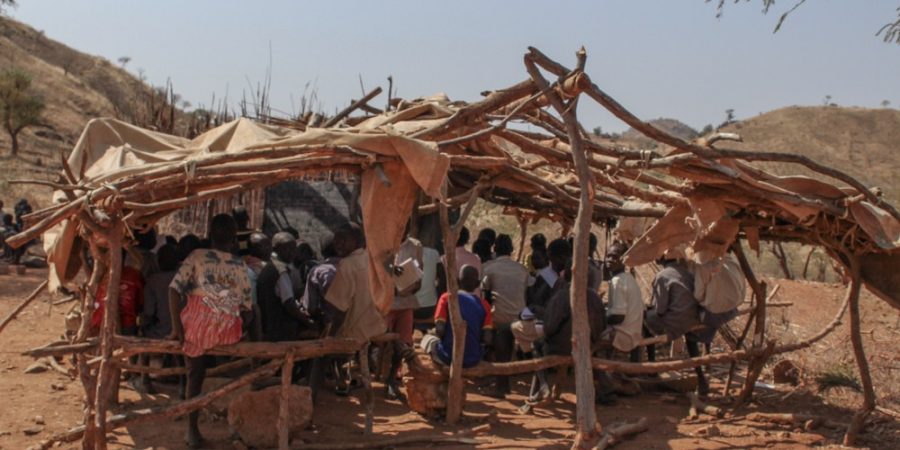 The world has long known of the tragedy of South Sudan, yet has largely overlooked the conflict in the Nuba Mountains, an area just north of South Sudan and inhabited by dozens of unreached people groups.

In 2012, compassion for the peoples devastated by the fighting led a network of organizations to form the Greater Nuba ACTSion Coalition (GNAC). Built around principles in the Book of Acts, the Coalition takes a holistic approach and ministers to physical as well as spiritual needs. GNAC leaders developed four priorities, called “Pillars,” to guide their work: Gospel, Relief, Education, and Capacity Building.

“We want to build on a solid foundation,” says John Becker, GACX VP for Global Networking and Partnerships and a co-founder of GNAC. “And we believe these four Pillars reflect an Isaiah 61 vision for holistic transformation of the entire region. This is what Jesus came to fulfill!”

More than 20 organizations have banded together in GNAC, including GACX members such as Christ Commission Fellowship (CCF), Jesus Film Project, Africa Inland Mission (AIM), Vision 5:9, and The Timothy Initiative. Hundreds of local believers have been trained and simple churches planted in more than 50 tribes — all of them previously unreached. Nevertheless, the need remains to demonstrate God’s love to the tens of thousands who have not yet heard the good news.

Strengthening the coalition with local leaders

Each year GNAC holds a conference in which coalition partners come together to coordinate efforts and plan for the future. At first, conditions on the ground forced GNAC to hold the conference in neighboring countries or refugee camps on the South Sudan border.

This past February, however, they boldly moved the conference into the heart of the Nuba Mountains, to the provisional capital of Kauda. As a result, some 80 local and regional believers participated, as well as more than 20 international guests from as close as South Sudan, Uganda, and Kenya, and as far away as Nigeria, Sweden, and Australia.

“This new location empowered a local community formerly in isolation and under intense persecution,” says GNAC Director John Jefferson. “Giving them a voice now being heard by brethren across the globe.” Indeed, this is the real strength of the Greater Nuba ACTSion Coalition—it’s a partnership catalyzed by international partners, yet completely owned and facilitated by local believers.

For example, communication — though limited in the Nuba Mountains —continues among coalition partners through the ongoing efforts of brave individuals both from within the Nuba community and outside. These individuals continually trek either to the border camps or into the mountains carrying Bibles, training materials, medicines, school supplies, emergency food relief, equipment, “JESUS” film kits, and solar-powered players.

“Friendships forged during the difficult times,” says Jefferson, “have built trust between international and indigenous partners.” This trust bolsters relationships and opens doors to help meet both physical and spiritual needs through various projects.

“We are better able to address realities on the ground in terms of the actual number of tribes and languages and areas of concentration,” says Becker. “Before it was unclear how many tribes and languages were actually there. But when we pull together, we’ve been able to streamline the list of people groups.”

Another benefit of partnerships, according to Becker, is the ability to coordinate church planting between partner organizations. This leads to better communication and the sharing of data and resources.

“We’ve learned that when we cooperate and communicate, we don’t compete for leaders” explains Jim Whelchel of CCF, who has conducted church-planting training in refugee camps. “Nor do we conduct training in the same area, which leads to missed opportunities in other places.”

“Through the connections with GNAC and local organizations,” Whelchel goes on, “we have learned of opportunities we didn’t know existed. I’m not sure of the other organizations, but to date people taking our training, and their disciples, have established more than 500 small groups and house churches with as many as seven generations.”

Yet Coalition partners dream of much more. With the recent changes in the Sudanese government and the Cessation of Hostilities signed by all parties, GNAC leaders hope that ambitious plans for literacy, agriculture and economic development can be carried out with no interruptions from civil conflict. They also hope to continue equipping local leaders and building disciples.

“Here’s a region that has been insecure and on the brink of starvation for a generation,” says Becker. “Now it has the chance to build on a new gospel-centered  foundation. We find that as people are reconciled through the gospel they also find liberation from poverty and deprivation. This is one of the most exciting parts of this—with a holistic approach, you can see that the reach of the gospel is bigger than saving souls, it is actually about developing economies, education . . . it has a tremendous scope!”