Making Disciples and Training Church Planters at the US/Mexico Border 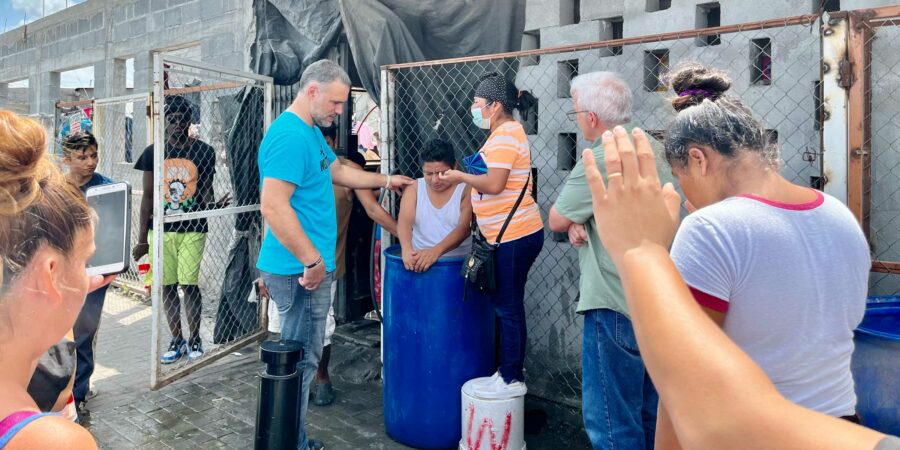 Calvary Church had long been serving immigrants through various forms of humanitarian aid, says Chad Mason, pastor of multiplication and mobilization at Calvary. They had also been encouraging their missionaries to use the Four Fields model of church planting and had taught members of their bilingual church these concepts as well.

Meanwhile, e3 Partners had expertise in evangelism, discipleship, and church planting, according to Will Smith, e3 Strategy Director for Global Migration. They develop local leaders using a “Model-Assist-Watch-Launch” paradigm.

At the 2019 GACX Forum in Dallas, Pastor Chad stopped by the e3 booth to investigate working together. e3 liked the idea, for they wanted to partner with groups along the border. “We can train and bring volunteers and resources,” says Claudia Adame, an e3 executive vice president who coordinates strategy for the Rio Grande Valley, “but local people actually make the impact.”

Immigration at the southern border ebbs and flows with the political winds. Last year people began streaming north once again, with many filling immigrant camps on the Mexican side of the border. As Will and Claudia watched the news, the conviction grew that they had to do something. So they contacted Pastor Chad, who invited them to come down and take a look around.

“e3 wanted to find a way to engage with discipleship and church planting,” says Pastor Chad. “That gave us a push and the opportunity to do it with them.” Pastor Chad took the e3 team to Plaza de la República in Reynosa, Mexico—a few blocks from the International Bridge crossing the Rio Grande and just 20 minutes from Calvary—to see the 400 or so immigrants waiting for their papers to be approved.

A simple plan begins with going

“Our plan was simple,” says Will. “Cross the border, listen to people, and see what God was doing.”

“We wanted to understand what was happening and see how we could be involved,” adds Claudia.

During the visit, as they strategized with Pastor Chad, Will and Claudia suggested they send people to train key members of Calvary, who could apply the Four Fields concepts to reaching out to the immigrants. Pastor Chad suggested several people, including Osbaldo Gámez, a 25-year-old music teacher living in Reynosa.

Osbaldo had been attending a No Place Left group at Calvary and had caught the vision for church planting. In theory, at least. “I had read about the tools and the vision,” says Osbaldo, “But that didn’t produce a church movement.”

Then the pandemic kicked in, Osbaldo lost his job, and the border closed. When Calvary invited Osbaldo and his wife to work with mentors from e3, he jumped at the opportunity. First came Stephen Frein from South Carolina and Joseph Saleeby from Guatemala. They asked if Osbaldo knew how to share the gospel using the Three Circles illustration, but he did not. “We will model it for you,” they replied, “then we are going to assist you as you do it.”

Stephen and Joseph took Osbaldo and his wife to Plaza de la República to share the gospel and look for a Person of Peace. They met several Christians among the immigrants, and many people received Christ.

“Here’s what happens in the camps,” says Chad. “You begin sharing the gospel with one person, and soon 20 or 30 people are gathered around and hear it. When you give an opportunity to follow Christ, everybody raises their hands. We realized right away you can’t count conversions by verbal professions of faith. So we got a blue plastic barrel, filled it with water, and said, ‘who wants to be baptized?’ That first week we had 8 baptisms which represents more than 100 people that made professions of faith.”

Two weeks later another e3 team came in, led by Agustín San Martín of Argentina, who goes by “Oggie” and lives in Miami. Oggie immediately took Osbaldo and others under his wing and modeled discipleship and church planting. They taught the 8 baptized believers how to share their faith and launched them into the harvest field of the camp. On the first day, some 200 people made professions of faith, and 25 were baptized.

“It was like you put the boat in the water and the fish jump into the boat! says Claudia.

Continuing the priesthood of every believer

Oggie continued to teach the new believers how to follow Jesus, share their faith, and function as a small church – all with Osbaldo soaking in the modeling. He emphasized the priesthood of the believer, even encouraging the young believers to baptize friends they had led to Christ.

By the end of the week everybody in the camp, now 600 strong, had heard the gospel, a new church had been launched, and Osbaldo had not only caught the vision of church planting but lived it out. Afterward, Osbaldo’s team quickly expanded, with young leaders like Christian becoming integral to the ongoing work.

“What helped me the most,” says Osbaldo, “was to have someone help me do [the ministry], then watch me do it, then launch me to do it myself. Now I’m committed to teach common believers to do the same thing I have learned to do.”

Last August, the immigrant camp in Plaza de la República grew to more than 5,000 people. By now, Osbaldo and others from Calvary were ready to continue the work by themselves. e3 has brought in teams every month or so to assist, but the local guys on the ground have been leading the church and training leaders.

The work doesn’t end in the camp, however. The vision is much larger. It seems that as soon as leaders are trained, they get cleared to enter the States and travel to their final destination – often the home of a relative or friend in one of the many Spanish-speaking communities around the country. “We try to track where they are landing,” says Pastor Chad, “so we can connect them to churches in that area.”

Thus far three generations of leaders have been raised up in the camp and sent on their way. They have been commissioned by their camp churches, and they see themselves as ambassadors for the kingdom of God. Over the next few months, Osbaldo plans to visit some of these leaders and encourage them to plant churches wherever they find themselves.

Doing more together than alone

Together, e3 and Calvary Church have been able to do things that would have been difficult alone. Calvary has extensive experience in working with migrants, and they have provided a warm welcome to outsiders. Furthermore, they share the same vision as e3—to use the Four Fields concept to plant churches.

Meanwhile, e3 has effective training processes and the capacity to train leaders from Calvary.

“We have been building our strategy together,” explains Claudia. “After every trip I debrief Chad, because communication among partners is important.

“It would have been difficult to get traction [in the camps] without having a presence there. Calvary Baptist Church and Pastor Chad have a long-term presence in the area, plus expertise and leaders on the ground. This has made it a strong partnership.”

“This partnership has been the most fruitful of my ministry career,” concludes Pastor Chad. “When I think that this opportunity had been there for so long, within our sphere of influence, I am filled with wonder at all that God has done in such a short amount of time! Without e3’s partnership, encouragement, and willingness to model the work for us, we would not have seen the Lord work in this way.” 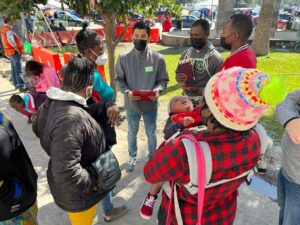 Sharing the gospel with imigrants on the US/Mexico Border 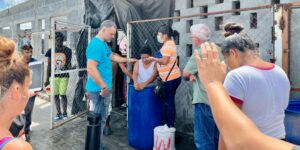 Baptizing a new believer on the US/Mexico Border. 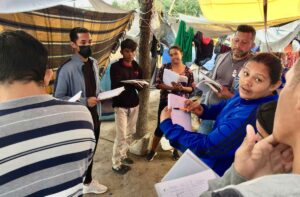 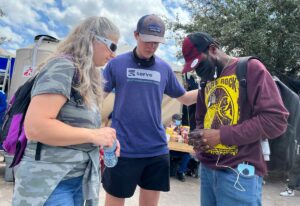 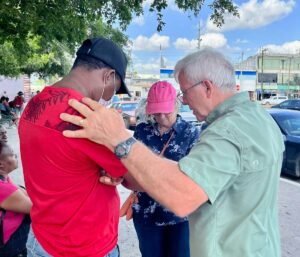 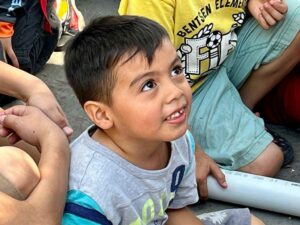 A child listens to teaching on the US/Mexico Border 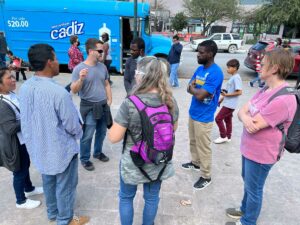 Sharing Jesus with a group on the US/Mexico Border 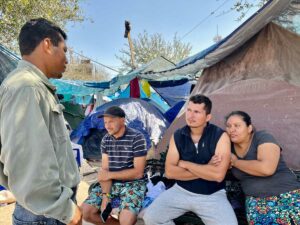 Sharing Jesus with others on the US/Mexico Border 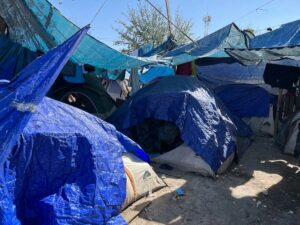 Immigrant tents on the US/Mexico Border 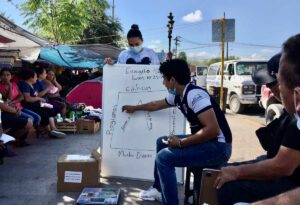 Teaching the principles of church planting and multiplcation to immigrants on the US/Mexico Border. 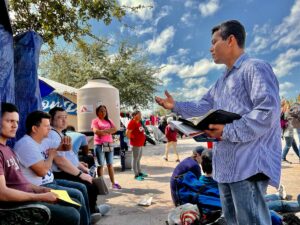 Teaching the principles of church planting and multiplcation to immigrants on the US/Mexico Border.

This story has been updated to clarify a few key details.